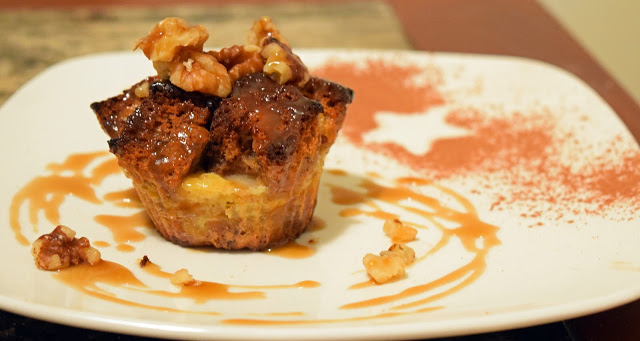 1. Preheat the oven to 200 degrees and toast sliced banana bread in the oven for about 25 minutes to make it stale. Cut the toast into cubes. 2. Turn the oven up to 350. Mix all ingredients except for the bananas and banana bread in a medium bowl. Assemble puddings: in each greased baking cup place a layer of bread cubes, packed as tightly as possible. Top with a layer of banana slices and then another layer of tightly packed banana bread cubes. Pour egg mixture over the top layer of bread and fill the cup up with the egg mixture up to about 1/4\" below the top. 3. Bake assembled puddings until set, approximately 20 - 25 minutes. Pop out of baking cups and serve, drizzled with caramel.

I love using unique and unusual ingredients (such as a sweet \"bread\" in bread pudding) to play with dishes and give them a more exotic flavor. Banana bread is fabulous as a bread pudding and delightfully decadent.